The goal of this document is to provide more information about why columns are dropped in Driverless AI.  This document is meant for an internal audience.  It should be used to help with any support tickets or customer questions regarding why a feature was dropped.

In Driverless AI's AutoDoc, there is a section defining the reasons why any column was removed.  An example of this section is shown below: 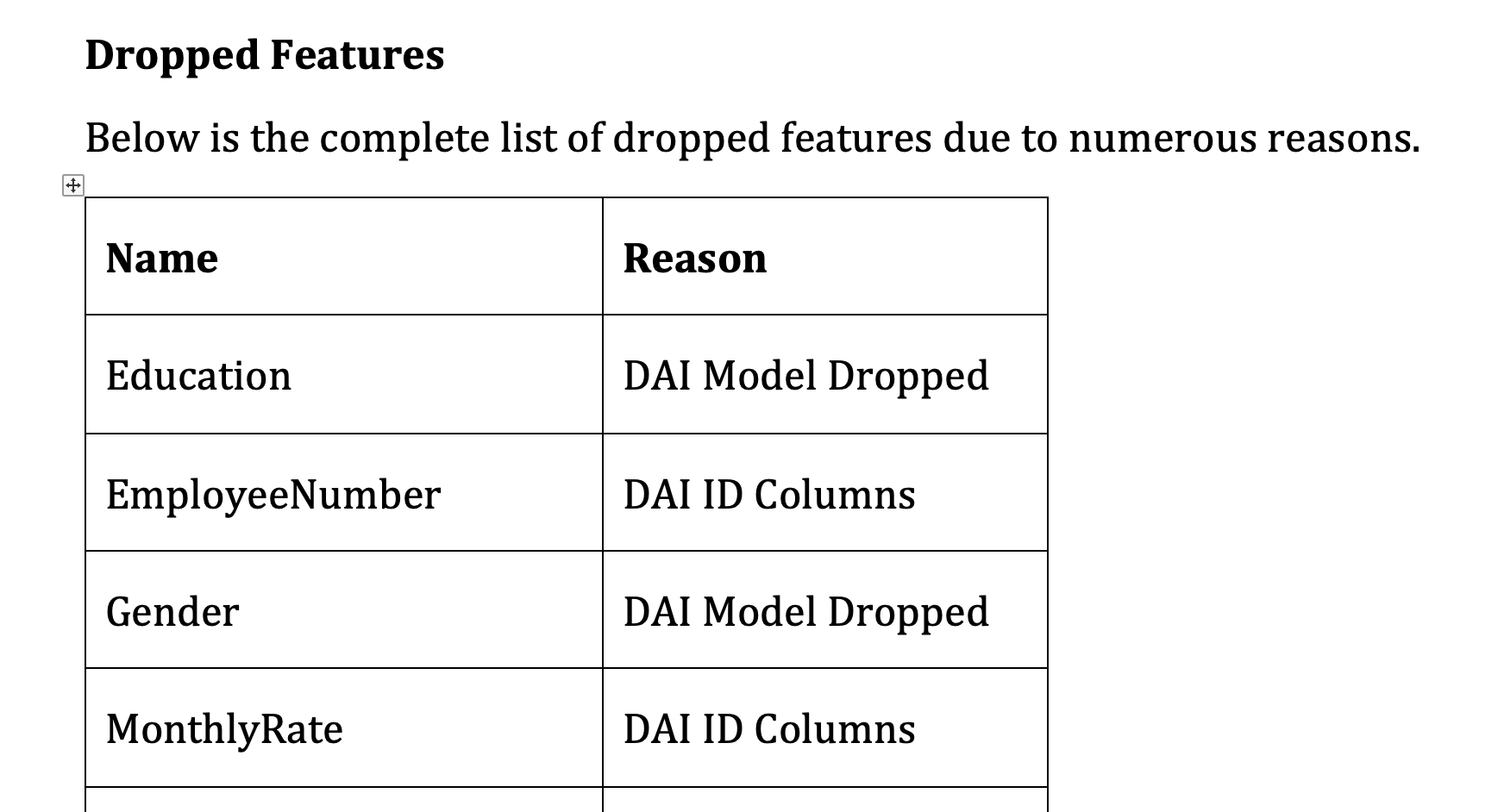 The reasons listed in the AutoDoc about why a column is removed are the following:

If the reason a column is dropped is listed as "DAI Leakage", it means that the column probably has the answer in it. For example, if I am predicting Age and I have Year_of_Birth as a feature, I know that the answer is accidentally leaked by Year_of_Birth.

If Driverless AI drops the feature for this reason, you can find more details in the Notifications tab and the logs. You will see a message like this:

For more information about how leakage is detected, refer to our documentation: https://docs.h2o.ai/driverless-ai/1-10-lts/docs/userguide/expert_settings/features_settings.html#check-leakage

The number of allowed columns in the model can be controlled in the Expert Settings by the following parameters:

If this is the reason the column was dropped, you will find more information in the logs.  Here is an example of the message you will see:

In the above example, Driverless AI dropped the features: Gender, EducationField, JobRole, and OverTime because they had low variable importance and due to my settings, it knew it had to build a model with:

There are multiple reasons why AutoDoc may list that the feature is not in the model because the "DAI Model Dropped it".  This section describes the types of reasons that may occur and how you can find more information about it.

Reason #1: There was no transformer available for that feature

This can happen if the transformer that handles the type of data is turned off.  For example, if the ImageTransformer is turned off, then any image column will have to be dropped from the model. You can determine if this is the case with your model by downloading the logs and searching for the column that was dropped.

If it was dropped because no transformer was available, then you will find a message like this in the logs:

Reason #2: Driverless AI is running out of memory

If Driverless AI begins to run out of memory (this can often occur for very large datasets), then it will start to drop columns.

In this case, you will see OOM warnings in the logs and mention that columns are being dropped.

For more information about how this response is triggered, see the documentation: https://docs.h2o.ai/driverless-ai/1-10-lts/docs/userguide/expert_settings/system_settings.html#allow-reduce-features-when-failure

Reason #3: The Interpretability Setting Reduced the Complexity of the Model

Driverless AI may choose to drop features because the Interpretability Knob restricts the complexity of the model.  If this occurs, you will see a message like the following in your Notifications and in your logs:

Reason #4: Driverless AI Dropped it During the Genetic Algorithm

The genetic algorithm can decide to drop features for multiple reasons.  This is Driverless AI's IP and the reasons why a column is changed by the Genetic Algorithm can change for any release.

The main reasons why Driverless AI would choose to drop a column are:

Of these reasons, the logs will not describe why it occurred.

Did you find it helpful? Yes No

Send feedback
Sorry we couldn't be helpful. Help us improve this article with your feedback.